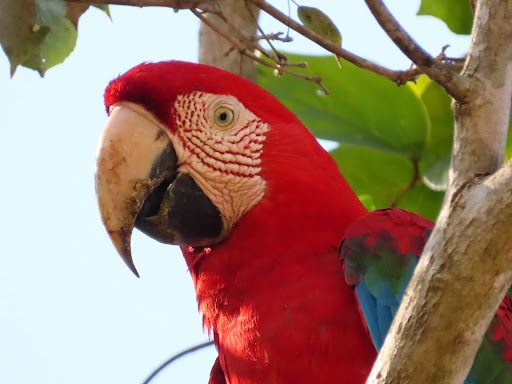 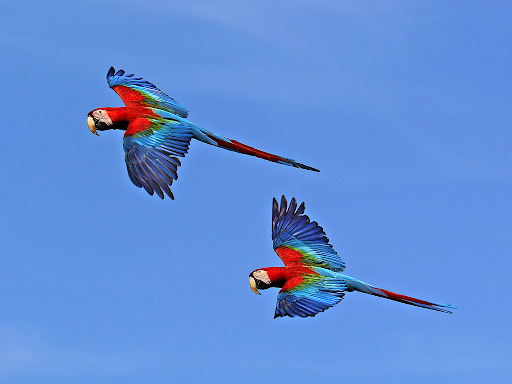 The red-and-green macaw (Ara chloroptera) belongs to the psittacidae family, animals that have as their main characteristics their strong, curved beak, used as a form of support to move around, firm feet that are often used to hold food, and a mobile jaw articulated with the skull.

Unlike the hyacinth macaw, the red-and-green macaws are not threatened with extinction because they are also located in other countries in America. But this does not mean that we should stop worrying, since in some states of Brazil they are at specific risk, for example, in Paraná where they are very endangered.

Keep following along, we will tell you more about the species and what its threats are.

Macaws have very unique characteristics and each one has its own particularity. Red-and-green macaws are the second largest psittacidae in the country and can measure up to 95 centimeters, weighing about 1.5 kilograms.

In addition, it is an extremely eye-catching bird, with its bright red plumage, wing mixing red, blue and green colors, elongated tail and strong and loud vocalization. Still, it presents, on its face, the bare skin, with some thin lines of small red feathers.

A very similar species is the araracanga (Ara macao), but there are some visible characteristics that differentiate them. The red-and-green macaw is a bit larger, has red details on its face (while the macaw does not have them) and has a different color pattern of its wings, being green in the middle part and blue at the tips until its tail (while the red-and-green macaw also includes a yellowish color).

The two species are recognized as sister species, that is, they are evolutionarily and morphologically similar.

The red-and-green macaws (Ara chloroptera) have a wide distribution. They are birds of the Atlantic Rainforest found in the states of Bahia, Minas Gerais and São Paulo, but also in the northern, central-western regions and today are widely found in Mato Grosso do Sul, being very well observed and of course, where the Hyacinth Macaw Institute carries out its research with these animals.

In addition, it is also found in other South American countries such as Colômbia, Guianas, Equador, Peru, Bolívia, Paraguai and Argentina. In Central America it is located in Panamá. 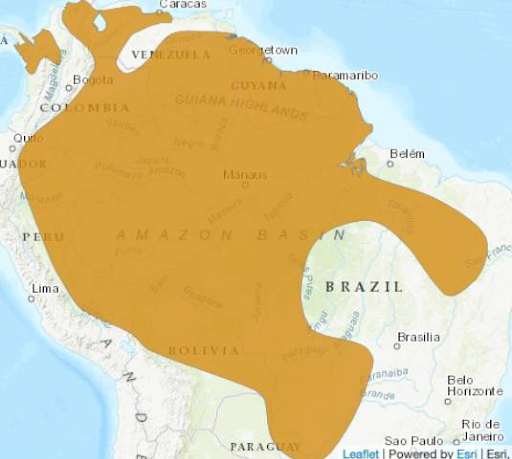 An interesting fact discovered in 2012 in a research conducted by the Biosciences Institute of the USP is that the red-and-green macaw presents different population genetic characteristics in certain locations where it lives.

For example, red-and-green macaws that reside in Bahia are genetically different from those that inhabit Mato Grosso do Sul. This is important for management and conservation plans, because in case there is any introduction of the birds in different states, it can harm the already resident populations, for example, by transmitting diseases.

How do they feed? And on what?

Its diet is based on fruits and seeds, as well as other parts of the plant, such as sprouts and flowers. It is quite generalist, and the fruit and seed species can vary greatly since its distribution is so wide. 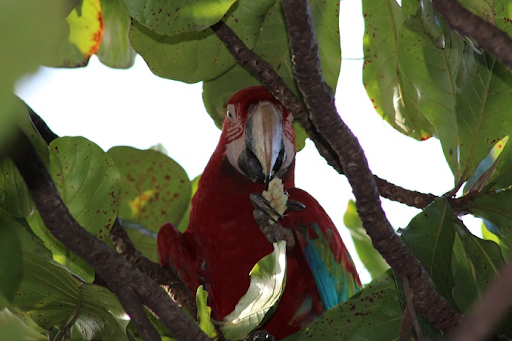 When they choose the ideal tree to search and forage for food, they land and begin their search, but usually they do not stay alone, forming groups of several individuals in the same tree to feed on the available seeds or fruits.

Psittaciformes, in general, are monogamous and the red-and-green macaws are no different. Monogamy is very efficient for the species, since it provides greater care for its partner and offspring, thus ensuring its survival. 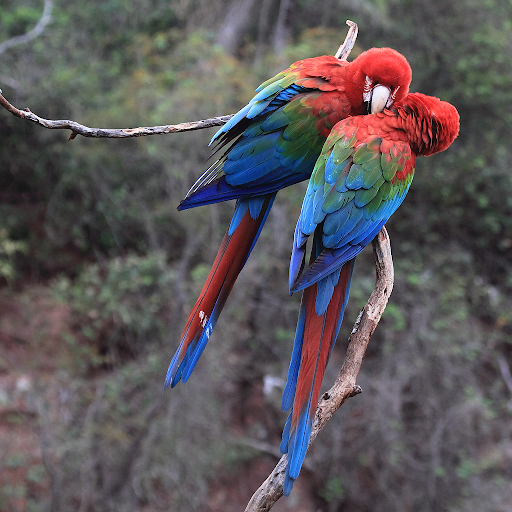 This behavior is very interesting and is not only linked to copulation. They also form social and affiliative bonds, performing other functions of life together. Once they pass through the breeding season, these animals stay together and help each other feed and clean each other’s feathers. 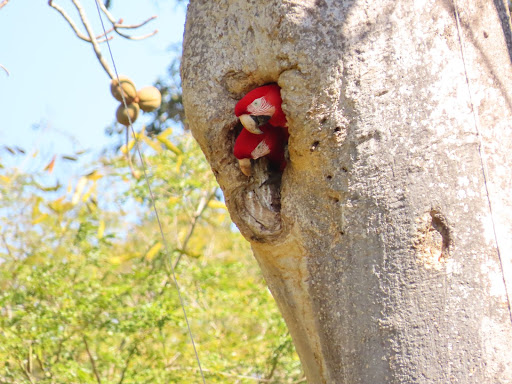 A pair of red-and-green macaws in their nest / Photo: Hyacinth Macaw Institute

After they reach sexual maturity – from 5 years on – they form couples and then reproduce annually.

They nest in tree hollows and prefer calm areas and the interior of forests, selecting nests that are more camouflaged in the vegetation area, with a smaller opening and greater depth.

Besides, they are faithful to their nesting sites, according to the research done by the Hyacinth Macaw Institute itself, about 71% of the couples have reused the nests for at least once in a decade or more. However, it is common for there to be competition for the nests with other species, including the Hyacinth Macaw, which sometimes makes it difficult for the Hyacinth Macaws to reuse. 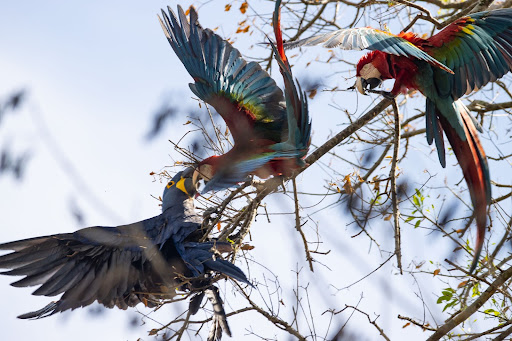 Interaction of the red-and-green macaw with the hyacinth macaw / Photo: Hyacinth Macaw Institute

The incubation period of the eggs is 28 days, laying about 2 to 4 eggs. The parental care of the nest is done by both parents. While the mother incubates the eggs, the father defends the nest to avoid predation by hawks, toucans, skunks and jays. Other impacts can also interfere with incubation or the survival of the nestlings, such as flooding or loss of the nest.

Due to its great beauty and easy adaptation, the red-and-green macaw is one of the targets for illegal trade in wild animals, illegal hunting and commercialization of its feathers, besides suffering from all the environmental devastation, such as deforestation, fires, and habitat loss.

Regarding their conservation status, they are classified as “Least Concern” globally, in the IUCN category. But they are locally endangered in Paraná, Bahia, and São Paulo, where they occur only in Morro do Diabo State Park, and are on the official lists of endangered fauna species of the respective states.

Although they are very well known, research involving red-and-green macaws is still scarce, leaving some gaps in the knowledge of the species. We hope that with this text, you have gotten to know them better!