The HYACINTH MACAW INSTITUTE is a private non-profit Non-Governmental Organization, located in Campo Grande, primarily aimed at promoting environmental conservation. The Institute has been developing environmental protection projects with this purpose, such as Hyacinth Macaw Project, developed 30 years ago in Pantanal by maintaining viable populations of hyacinth macaws (Anodorhynchus hyacinthinus) in the wild in their natural habitat, over the medium and long-terms and other projects we invite you to visit.

Learn more about the Pantanal | Meet our base 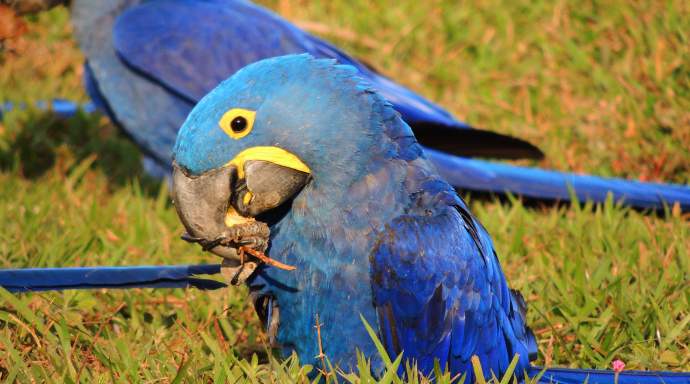 The Pantanal Biome is one of the largest floodplains on Earth, considered “Natural Heritage” by the Brazilian Constitution (1988) and “Biosphere Reserve” by the United Nations Educational, Scientific and Cultural Organization (UNESCO) in 2000 (Harris et al., 2005).

Due to its geographical location, it is in contact with different natural regions, with influences from other biomes such as the cerrado, the Amazon forests and the Paraná River basin and the Bolivian Chaco. It is directly influenced by the surrounding plateau, which are the highlands (mountains, hills, chapadas and depressions), and the average annual rainfall in the region reaches 1100 mm, with the rainiest period from November to March and the least rainy from April to September ( Mourão et al., 2004).

Pulse of the Waters: relief, climate and soil

Despite its name, the Pantanal is not a swamp, but an immense sedimentary plain that suffers periodic flooding, unlike the swamp that is always flooded. The Pantanal relief has a very particular characteristic: the low variation in the slope of the terrain. Thus, the annual floods occur due to the overflow of the banks of river beds, which flood the fields for part of the year.

The pulse of the waters is also responsible for the formation of:

• Ebbs: these are seasonal flooding fields between mountain ranges. They are mostly intermittent, but in places where the groundwater is closer to the surface, they are permanently flooded (FRANCO and PINHEIRO, 1982).

• Bays and salt marshes: Permanent and intermittent lagoons, where the bays are freshwater and the saline bays are saltwater (Abdon, et al., 1998).

On average, the water transit time is 5 to 6 months, from the North to the South, carrying sediment: it is the dynamics of the pulse of the waters leading to life. The climate of the Pantanal is classified, according to koeppen, as a humid tropical climate, with rainy summers and dry winters and the average annual temperature is 25°C. In the southern Pantanal of Mato Grosso, the soils are of sedimentary origin, where 92.5% are hydromorphic soils (humid area soil), according to Amaral, 1986. This leads to limitations to farming, as the soils are infertile, as well as periodically flooded.

The vegetation in the Pantanal is adapted to long periods of flooding (Adámoli, 1982) and is not endemic, being mainly influenced by the environments that surround it, such as the Cerrado, Chaco, Amazon Forest, Atlantic Forest (Ratter et al., 1988; Dubs, 1994). The main types of vegetation formed by medium-large trees are riparian forests, mountain ranges and woodlands, in addition to forests of “para-tudo” (Paratudais) and “carandás” (Carandazais). The “capões” and mountain ranges (forest ridges) are surrounded by non-forested fields and do not flood during the Pantanal flood period, functioning as a refuge where flood-intolerant species can establish themselves (Oliveira Filho and Martins, 1991).

Due to its location, the Pantanal vegetation is a mosaic of different ecosystems. It is directly influenced by three important Brazilian biomes: Amazon, Cerrado and Atlantic Forest and is also influenced by the Chaco biome (name given to the Pantanal located in northern Paraguay and eastern Bolivia). The landscape in the Pantanal is composed of fields, bays, salt pans, mountain ranges, capões, corixos or ebbs. The Pantanal has a very large variation of plant species and, therefore, animals, and is characterized by an interdependence with the flow of water, generating a great biodiversity and, according to floristic, pedological and flood aspects, the Pantanal can be divided into eight to eleven sub-regions (Nunes and Tomas 2004).

As for the fauna, the plain does not generate any endemism, but it is a place where you can easily find specimens of Brazilian fauna threatened with extinction, such as the giant anteater, marsh deer, giant otter and the hyacinth macaw. The Pantanal is considered one of the most important routes for migratory birds from the Northern and Southern Hemispheres. It has 263 species of fish, 41 species of amphibians, 113 species of reptiles, 463 species of birds and 132 species of mammals (BRASIL, 2017).

The exploration of the Pantanal plain began in the 17th century, with the search for metals and precious stones by the pioneers of São Paulo. After the occupation, exploitation and depletion of the Cuiabá mines in 1718, the region prospered again at the beginning of the 20th century, with the arrival of cattle ranchers and the first industrial activities such as the manufacture of broth and meat extract and leather tanning ( Per et al., 2003). In the 1950s and 60s, the hunting of the marsh caiman (Caiman yacare) supplied the growing international market. However, this activity was responsible for the decline of caiman populations in the region and, even with the hunting ban in 1967, the activity only stopped in the 1980s, when the international market began to demand legalized skins (Verdade, 2004). Currently, extensive cattle ranching, fishing and tourism are the main economic activities in the Pantanal (BRASIL, 1997). In some areas, management is done with rotation of native pasture, which is burned annually. In others, deforestation grows exponentially, where the “cerradão” and forest are giving way to cultivated pasture.

Tourism is a growing activity in the Pantanal, which if well structured and organized is an economic alternative that will help in the conservation of Pantanal flora and fauna. For presenting a beautiful open landscape and easy viewing of the fauna, the Pantanal is one of the most exuberant attractions of contemplation for observation, rural and ecological tourism.

In recent decades, the pressure for the implementation of development projects with serious impacts on the environment has increased, among them, the installation of hydroelectric plants in the headwaters of rivers, coal production and the construction of a waterway on the Paraguay River. These activities performed without responsibility lead to habitat mischaracterization. The water cycle is what maintains Pantanal biodiversity, and any change can compromise ecosystems and change this entire landscape (Almeida et al., 2003).

Despite the knowledge about the relevance of the Pantanal and its surroundings for the maintenance of water resources and for the conservation of regional biodiversity, there are few areas that guarantee the protection of the BAP (Upper Paraguay Basin). Based on official data obtained from the Mato Grosso do Sul Environment Department (SEMA/MS) and from the Brazilian Institute for the Environment and Renewable Natural Resources (IBAMA), only 2.9% of the BAP and 4.5% of the area of the Pantanal are protected by some type of conservation unit (Harris et al., 2006).

Studies indicate that the native vegetation of the BAP is seriously compromised, mainly due to the increased pressure of human occupation, associated with the lack of criteria and inspection in the issuance of licenses for deforestation issued by the government. If the deforestation rate remains at 2.3% per year, within a little over 45 years the original vegetation cover of the Pantanal will be completely lost and/or modified in such a way that it will be unlikely to reconstitute the climatic-hydrological processes and the rich regional biodiversity. The current situation reveals that the public policies adopted for the BAP region, including the Pantanal region, are very far from the real needs of conservation and sustainable use of this heritage, added to an apparent ineffectiveness of the public power in enforcing the existing regulations. (Harris et al., 2006).

Thus, the Pantanal is a very significant area for conservation, which should be prioritized in regional programs and deserving special attention due to its vulnerability to the main impact vectors operating in the region (Olson et al., 1998).

Base at the Caiman Ecological Refuge

In 1998, at the invitation of Mr. Roberto Klabin, the first Field Base of the Hyacinth Macaw Project was inaugurated in the Caiman Ecological Refuge, in the Pantanal of Miranda sub-region. This base, which was a milestone for the Project, consisted of a staff house and a Visitors Center. Thus, it was possible to add other people to the work, since until then the Project depended exclusively on Neiva Guedes, the only person who knew all the nests and developed, practically alone, the field activities. Based in Caiman, more than 15 farms are monitored in the region. In addition to being a starting point for trips to more distant regions of the Pantanal.

Annually, the Hyacinth Macaw Project receives several visitors, all very important! But we can highlight some acquaintances: Former President Fernando Henrique Cardoso and family; Hollywood actor Harrison Ford; the former Governor of Mato Grosso do Sul, André Puccinelli; the Prince of Japan, Akishino, and wife; the Minister of the Environment, José Sarney Filho and family; the Governor of Mato Grosso do Sul, Reinaldo Azambuja and his wife, among others.

In 2012, the Hyacinth Macaw Project base, which was located at the Ecological Refuge Caiman headquarters was transferred to Retiro Novo, 17 km away from the headquarters. With independent, comfortable infrastructure and capacity to host up to 8 researchers. It has a kitchen, a TV room, an office, a large cafeteria, a small laboratory for preliminary biological assessments and a Visitors Center.

Guests at the Caiman Ecological Refuge can learn about the activities of the Hyacinth Macaw Project, and carry out observation tourism, collaborating with the research. Also, at the Reception of the R.E.C, they will be able to purchase exclusive products of the project, contributing with their actions.

In addition to distinguished visitors such as ministers, presidents of CAPES and the National Council of Education, Pousada Araraúna received university students from Brazil and abroad. Based on the Pousada Araraúna, seven more farms were monitored in the region.