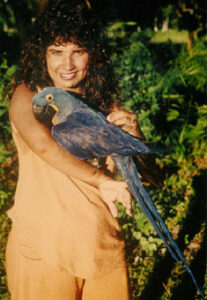 WHO IS NEIVA GUEDES? LEARN A BIT ABOUT HER CAREER PATH

In 1991, she began a Master’s degree program in Forestry Science at the “Luiz de Queiroz” Agricultural School – ESALQ/USP, having been awarded a scholarship by CAPES. Under the guidance of Prof. Dr. Álvaro F. Almeida, she developed the study “The Reproductive Biology of the Hyacinth Macaw (Anodorhynchus hyacinthinus) in the Pantanal – MS”. In the field, she worked in collaboration with North American biologist, Dr. Lee Harper. The study was conducted in the Nhecolândia Pantanal, using the infrastructure of the Fazenda Nhumirim, CPAP/Embrapa with support from the WWF and a vehicle provided by Toyota do Brasil (to get the vehicle, she became a factory test driver). Her work attracted the attention of the scientific community and in 1991, Neiva presented her initial findings on the reproductive biology of the hyacinth macaw at the 1st Brazilian Ornithology Conference, in Belém-PA, and at the Meeting of American Ornithologists in Montreal, Canada.

In October 1993, Neiva Guedes completed her master’s degree, with recognition for the technical quality, innovation, and relevance of her research. She continued the project without any institutional affiliation, until March 1994, when she entered CESUP, currently UNIDERP. At the University, Neiva received total support from the directors of the institution and pursued her fight for the conservation of the hyacinth macaw.
In 1998, while based at the Caiman Ecological Reserve, she was able to hire a full-time field research assistant. Until then, Neiva would take the Toyota jeep and travel in the Pantanal for 20 to 30 days at a time, transporting equipment, food, and at most, one assistant. During that period, she relied on the help of relatives, friends, volunteers, and interns. Despite the collaboration of dozens of people in field activities, Neiva was the only person who knew all the documented nests. Besides being a researcher, she was also a test driver, a driver, a mechanic, a mountain climber, a public relations specialist responsible for obtaining funding, and the project manager.
Neiva studied the life of the hyacinth macaws in the wild and went on to manage the environment, testing and producing artificial nests, handling eggs and chicks, and above all, involving the public and publicizing the importance of keeping the hyacinth macaws free-flying in the wild. As a result, these birds, which had become increasingly rare over the past few decades, have become common and abundant in various regions of the Pantanal and the State of Mato Grosso do Sul. This fact is not only supported by the data collected by the researcher herself, but also by other scientists and local residents. Over the last 17 years, the project has become an example of conservation, serving as a reference for other Psittacidae in Brazil and worldwide.

Neiva Guedes has published various works, including articles in scientific periodicals, publications for events and conferences, and book chapters, and she has given dozens of lectures in Brazil and abroad. Neiva has trained over a hundred academics (Brazilian and foreign) in the techniques she developed for the project, and has contributed to the preparation of teaching material.

Neiva Guedes is married to Joaselei Lemos Cardoso and they have a daughter named Sophia.

Neiva M. R. Guedes earned an undergraduate degree in Biology from UFMS (1987), a master’s in Forestry Science from ESALQ/USP (1993), and a doctorate in Zoology from UNESP/Botucatu (2009). She is a professor and researcher in the Master’s Program in Environment and Regional Development of the Universidade Anhanguera – Uniderp. She is the president of the Instituto Arara Azul.
Since 1990, she has worked for and coordinated the Blue Macaw Project, where she has developed studies of the basic biology and monitoring of the endangered species Anodorhynchus hyacinthinus. She promotes nature conservation management and environmental education activities. She is a member of the “Committee for the Conservation and Management of the Hyacinth Macaw (Anodorhynchus hyacinthinus)”, the “Committee for the Conservation and Management of the Lear’s Macaw (Anodorhynchus leari)”, and the “Workgroup for the Recovery of the Spix’s Macaw (Cyanopsitta spixii)” coordinated by IBAMA. She is a member of the board of Parrots International.

Her works have been published as book chapters, journal articles, and for conferences, and she has also given numerous lectures in Brazil and abroad.
Areas of expertise: Biology, management, conservation.

Neiva Guedes has given numerous interviews to the various media. The most recent are:

Project work began in the Nhecolândia Pantanal with the support of the Fazenda Nhumirim of the Pantanal Center from Agriculture and Livestock Research – CPAP Embrapa and 13 other properties in the region. Later, at the invitation of the owners of the Pousada Arara Azul, the Project expanded to the Abobral Pantanal.

Currently, the Project focuses its research efforts in the Miranda region, because it has a Field Base in the Caiman Ecological Refuge (R.E.C.). Starting from this point, the Project is able to expand its macaw monitoring efforts to a radius of more than 57 farms in this region and other neighboring areas.

In the Mato Grosso region, research is carried out in order to monitor and track the population of hyacinth macaws in the Barão de Melgaço and Perigara regions in the Pantanal. Due to the high costs of travel and the difficult access to this region by researchers, the work is normally concentrated and carried out during the breeding period of hyacinth macaws (from July to December).

In other regions of Brazil, such as Tocantins, São Paulo and Bahia, there are researchers associated with Instituto Arara Azul, carrying out monitoring work on nests and baby birds (macaws as well as other species), under the guidance of Neiva Guedes.

In 2016, the first hyacinth macaw nest in the region of Campo Grande-MS was registered, thus marking the species’ arrival in that city. To get to know more about the work performed in this region, click on Learn More.

Currently, the field team consists of the Project coordinator, Neiva M. R. Guedes, four collaborating biologists, a technician in Ambiental Conservation, a field assistant, as well as the participation of interns and volunteers. (See the whole team here). Want to be part of this team? Click here:

Associate researchers participate sporadically in field activities, depending on the objectives, but once the material is collected it is sent to the research partners in the laboratories at UNIDERP, USP, UNICAMP, UNESP, and ULBRA.

The Project relies on a full-time team, generally 1-2 people in the first half and 3-6 people on the second half of the year, to develop the activities of monitoring, handling and research at Pantanal.

During the dry season, from June to November, we use the Toyota Hilux for travel and have access to almost all the nests. During the flooding season, some nests are isolated by water. In these occasions, we use tractors, boats, horses, or if necessary we go on foot, carrying all the necessary equipment in backpacks for up to several kilometers, depending upon the location of the nest.

Additionally, during the course of the year, we work with community involvement through environmental education for children, ranch hands, and ranch owners or in the schools, we give lectures, we conduct sewing, handicraft, and other workshops for low-income women, and we participate in fairs and exhibitions.