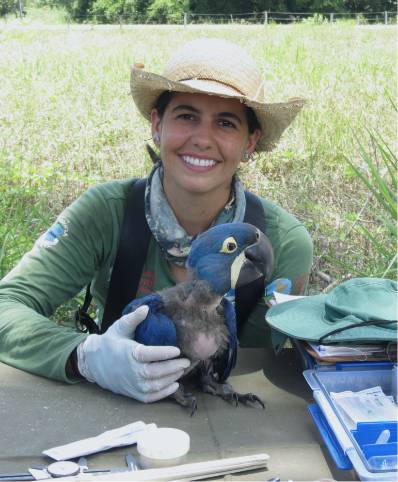 In 2010, he graduated in Biology from the Federal University of Grande Dourados. During her last year at the university, she developed research in the area of Ornithology, in the theme Frugivory and Seed Dispersal by birds. In 2012, she was a trainee at the Hyacinth Macaw Project and in 2013, a bilingual guide at Refúgio Ecológico Caiman, in the Southern Pantanal. In 2016, she became a Master in Animal Biology, from the Federal University of Mato Grosso do Sul and worked as a biologist and bilingual guide at the Onçafari Project, also in the Pantanal. She is currently part of the field team of the Hyacinth Macaw Project where she performs activities involving the study of basic biology, species monitoring, among others.

Close Menu
We use cookies to ensure that we give you the best experience on our website. If you continue to use this site we will assume that you are happy with it.OkPrivacy policy