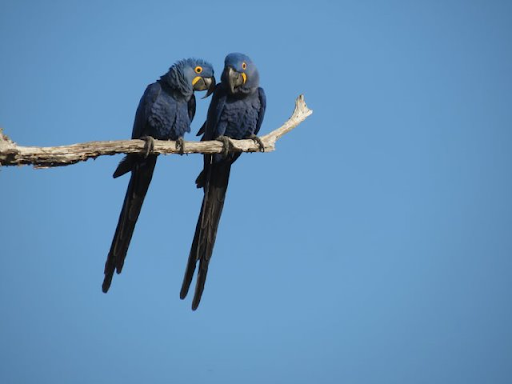 The imbalance caused by man has left one of Brazil’s greatest beauties very close to disappearing. We are talking about the Hyacinth Macaw (Anodorhynchus hyacinthinus), a large and incredibly intelligent bird in the Psittacidae family.

Today, it is possible that there are more individuals in captivity than in the wild. But fortunately, we have seen an increase in their populations, especially in the Pantanal region. Stick around and learn about the main characteristics and threats about the bird that gave rise to the Hyacinth Macaw Institute.

Parrots make up the family of parrots, parakeets, parrots and macaws. All of these have a set of characteristics so striking that they are easily recognized by anyone.

The rounded skull, the exuberant colors of the feathers and the extremely strong beak, capable of breaking the hardest fruits, are one of the most outstanding.

In hyacinth macaws it could not be different. She is the largest representative of the family, reaching a size of 1 m in wingspan and weighing about 1.3 kg. Impressively, in the period of peak weight, the chicks reach 1.7 kg.

The plumage is marked by a cobalt blue gradient that extends from head to tail, contrasting with the intense yellow present around the eyes, eyelids and on the bare skin around the base of the jaw. The bill is large, massive, curved and black, forming almost a circle with the head, while the tongue is thick and black. 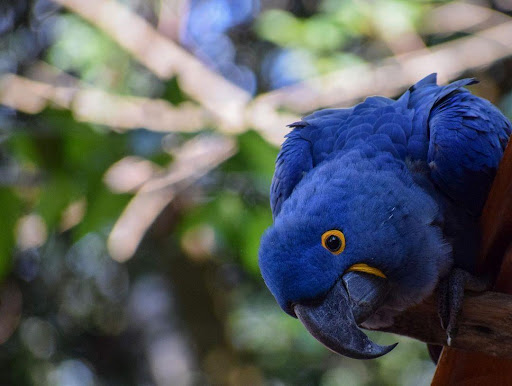 In mid-flight or when showing their wings, it is possible to observe the black coloration of the remiges and retrices, which explains why they are also known as “black macaws”. 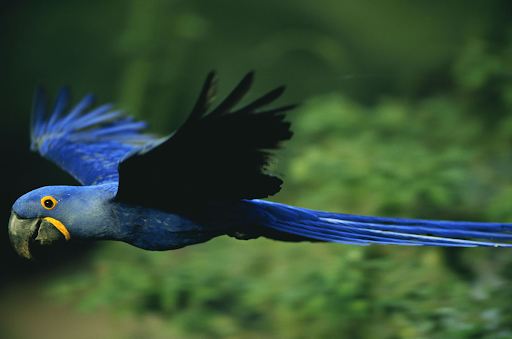 Many years ago, it was common to find these animals in much of Brazil. But currently, they occur in just three different regions: 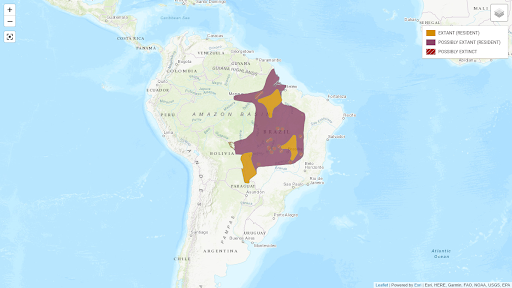 Map: Distribution of the Hyacinth Macaw IUCN (International Union for Conservation of Nature) 2016

What do they feed on?

The diet of hyacinth macaws varies according to the region and the availability of palm fruits and seeds. Pantanal populations feed mainly on acuri seeds (Scheelea phalerata) and bocaiúva (Acrocomia aculeata). In other areas, their menu is watered with inajá, babassu, catolé and piaçava seeds. 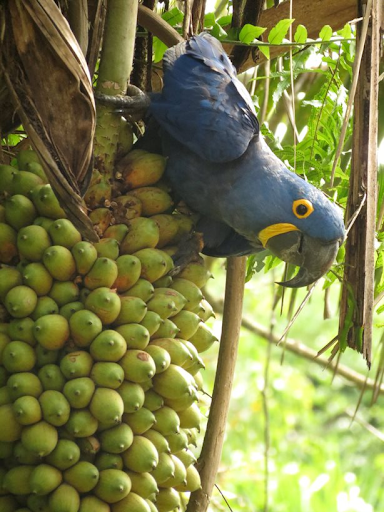 Although they are seen feeding directly from the bunches, it is more common to find them taking advantage of seeds from the ground that have already been digested by other animals such as cattle. 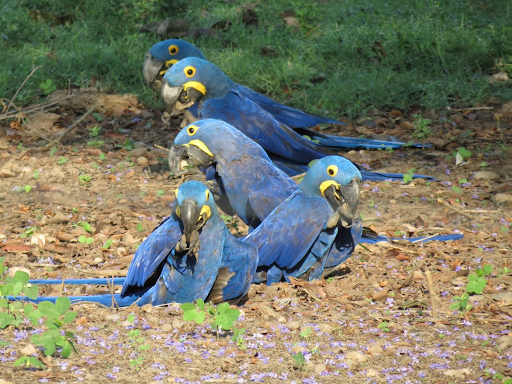 These birds are incredibly sociable and highly communicative, and it is quite common to find them living in flocks of 10 to 30 individuals. 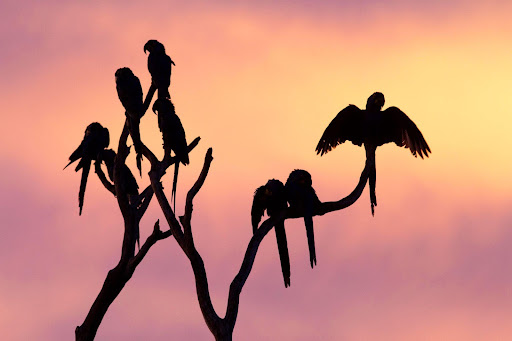 A very curious tactic adopted by this species is to feed in large groups. While the flock enjoys the available food, one of them stands sentry and, at any suspicious noise or movement, gives a warning cry and they all leave in retreat. In this way, they are able to protect themselves from possible attacks by predators.

In addition to the feeding areas, they also share spaces called “dorms”, where they meet to rest, sleep or even scratch and help each other clean their feathers, a practice known as preening.

Between the ages of 7 and 9, they reach sexual maturity and begin the search for a partner for reproduction, to which they are faithful throughout their lives.

After the pair are formed, they are easily seen flying and feeding together until the breeding season arrives, when they share the exhausting task of caring for the young. 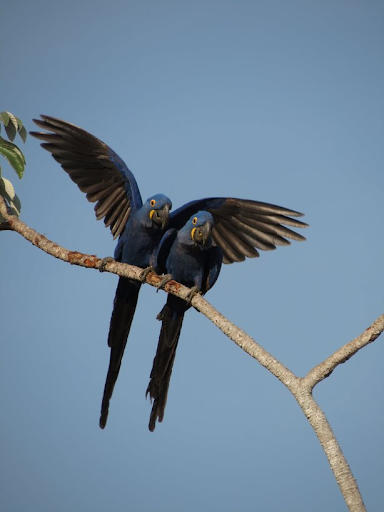 The peak of reproduction is very varied, but, in general, it happens in the months of September and October. But already around June, they begin to look for and repair tree cavities to live the experience of fatherhood.

During this time, the competition for nests between the macaws and the other species is very fierce. But at least these large macaws are able to take advantage of their huge claws and beaks to enlarge small holes made by other animals such as the woodpecker.

They turn small holes into a temporary and dignified home for their young. After using them, this space is commonly used by others and, for this reason, Hyacinth Macaws are recognized as important environmental engineers.

The reproduction rate of these animals is very low, some couples only reproduce every two years. Females usually lay 1 to 3 eggs and, while they are responsible for the function of hatching them, the partners provide all the necessary food for them.

The incubation period lasts from 28 to 30 days, but not all eggs reach the final stage of hatching, as they are targets of animals such as caracaras, coatis, toucans, rooks and skunks. After birth, the little ones are in serious danger until the first 45 days of life, when they are still subject to the most varied predators, even ants.

Interestingly, the highest mortality rate occurs when the age difference between the first and second offspring is greater than five days. In these cases, it is common for the second not to survive.

The young are born very tiny, measuring 82.7 mm in length and weighing only 31.6 g on average and are fed by their parents for the first 9 -10 months of life. With this, it can already be seen that the parental care exercised by the macaw daddies is intense, demanding a lot of time and energy. 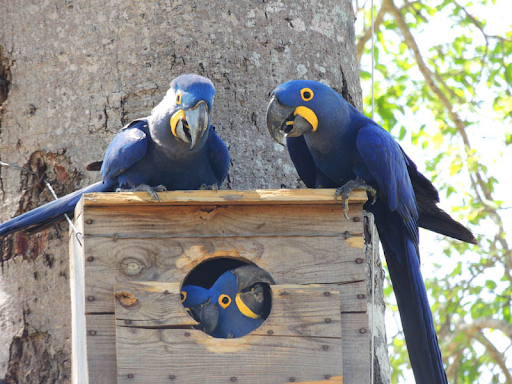 When they reach 3 months, they have already gone through an intense learning phase so that, finally, they take flight and no longer return to the nest. But for that, parents carefully groom their feathers and make sure that little one is ready to fly when the big day arrives. 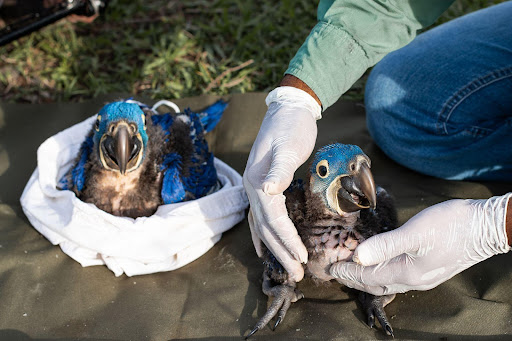 The great day has come!

A chick’s first flight is like a child’s first steps. It can be somewhat insecure and uncertain, as well as with impressive dexterity and agility. Anyway, from afar, the parents follow the performance of the newest flyer and with them, explore the surroundings. 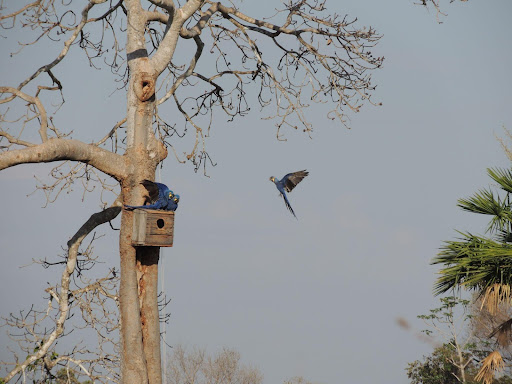 During this period, they learn to feed, fly and, finally, join the group of juveniles, leaving their parents free for a new reproductive phase. Sometimes, this time from birth to here, lasts long two years.

Macaws are really charming, and unfortunately, their beauty, docility and ability to vocalize have made them targets of illegal capture for trade in the domestic and international pet market.

In addition, their feathers were often used to make necklaces and irregular indigenous headdresses for selling souvenirs.

The trafficking of animals along with the destruction of their habitats, mainly due to the establishment of pasture in the Pantanal and the low reproductive rate of the species are one of the factors that led to the near disappearance of this animal, coming to be classified as a threatened species by the IUCN Red List.

Thanks to the various initiatives of the Instituto Arara Azul, which were born out of the passion of biologist Neiva Guedes, these macaws that a few years ago were classified as “Endangered (EN)”, today, are classified as Vulnerable (VU). Although this is already a huge step towards the conservation of these animals, we still have a lot to do!

One of our projects aims to implement artificial nests to house couples in the reproductive phase and thus indirectly contribute to population growth. In fact, of the 826 registered nests, 353 are artificial. Amazing, huh?

But for this to continue, frequent investments are needed, both in nest building materials and maintenance equipment. Click here and see how you can help keep our work going!