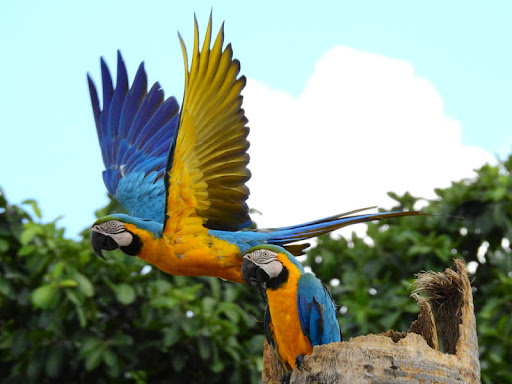 Get to know the Urban Birds Project – Macaws in the City

Monitoring the reproductive success of blue-and-yellow macaws in Campo Grande, MS and realizing, over the years, the influence of city development on their reproduction: this is the objective of our Urban Birds Project – Macaws in the City! Read on and understand this initiative better.

The arrival of the macaws in Campo Grande – MS

At the end of the 1990s, in Campo Grande, there was a period of long drought that, associated with deforestation and fires in rural areas and neighboring municipalities, forced the displacement of macaws in search of food and places for reproduction.

Thus, in 1999, flocks of macaws arrived in Campo Grande, capital of Mato Grosso do Sul. At the time, groups of 27 to 48 individuals of blue-and-yellow macaws (Ara ararauna) and red-and-green macaws (Ara chloropterus) were observed. Some of them settled in Campo Grande and with reproductive success, the blue-and-yellow macaws became common in the city. The rest migrated to other cities, up to the state border with São Paulo and Paraná. 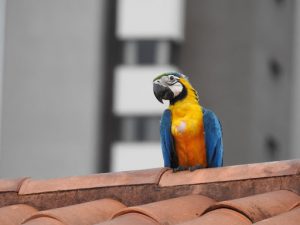 Starting in 2009, the first studies with blue-and-yellow macaws in the urban area of ​​Campo Grande began, but it was in 2011 that Dr. Neiva Guedes decided to monitor the nests occupied by the species in the city.

The interest in studying the macaws in this environment was mainly due to their occurrence in the area and the lack of studies with the species in free life. Allied to this, Dr. Neiva, at the time, with over 20 years of experience studying hyacinth macaws in the Pantanal, decided to apply her knowledge with this hitherto little-known species. Thus, the Urban Birds Project – Macaws in the City was born.

Why do this project?

Although blue-and-yellow macaws occur almost all over the country, they are not as studied in the wild! Thus, since 2011, we have followed its reproductive success in Campo Grande, and with that, we have been able to get to know the species better. We were also able to understand whether, in the medium and long term, the development of the city will interfere with its reproduction.

To better understand this cycle, we periodically monitor the nests in Campo Grande, from the laying of the eggs to the flight of the chick! For this, we mapped the nests around the city, always located in palm tree trunks, when they are dead. 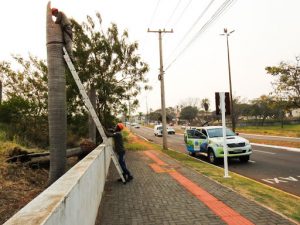 Monitoring of nests in the city of Campo Grande – MS. Photo: Larissa Tinoco

Today there are more than 350 registered and monitored nests, distributed in homes, sidewalks, commercial properties, parks and avenues, often close to or within green areas.

It does not stop there. Just before the chick flies, they are given a nanochip and a ring for identification. Some of them even receive medals that help us identify them at a distance. Equipment that after about 1 year falls off. We take advantage of and also collect biological material, such as blood and feces, for genetic, sanitary and sexing analysis of individuals. An arduous work, which requires a lot of effort from our team, especially between the months of August and December, and can last until February, during the breeding season of the blue-and-yellows.

We study blue-and-yellow macaws! But… what about the hybrid macaws?

The nests of hybrid macaws, a cross between a blue-and-yellow macaw and a red-and-green macaw, are also monitored! The cross, which had existed in captivity for years, began to be observed in the wild in the city of Campo Grande in 2002.

We do not know if this crossing took place in captivity and the offspring were later released or if the crossing occurred naturally, but it is a fact that hybrid individuals have paired with each other and successfully generated offspring.

Since the beginning of the project, we have managed to monitor more than 360 nests, more than 700 breeding pairs and more than 1000 chicks flying through the skies of Campo Grande. Thus, we have detailed data on the reproduction of these dear parrots, in 12 years of work. 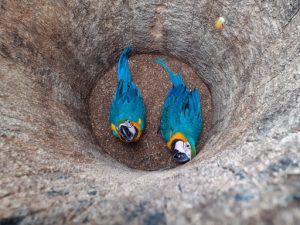 Blue-and-yellow macaw chicks in a nest in the middle of the city. Photo: Everson Freitas

Community and the pride of the macaws

With the Urban Birds Project – Macaws in the City, blue-and-yellow macaws have become a symbol in the city of Campo Grande. Several educational works on biodiversity conservation contemplate these beloved parrots. 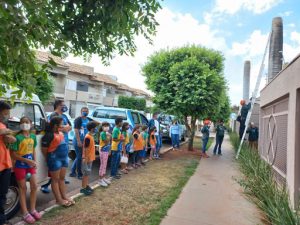 Universities and other research institutions are no different. Several works aiming to know more about the species have appeared. Community interest in these beautiful birds has only increased.

In 2018, Municipal Law No. 6,075 prohibited the cutting, felling, removal or sacrifice of trees, whether adult or not, where blue-and-yellow macaw (Ara ararauna) and red-and-green macaw (Ara chloropterus) nests are located.

And, in 2021, Municipal Law No. 6,567 recognized the city as the Capital of Macaws and established September 22 as the “Municipal Macaw Protection Day”. The purpose of the date is to disseminate information to the community about the need to conserve the local fauna, with macaws being the flagship species.

Well, if you are thinking of visiting Campo Grande, MS, you must be wondering if you will be able to see the macaws. And luckily, we offer a sightseeing tour to watch them!

On this scientific tour, our team gives a lecture about the Project and then we take you to follow our work, which includes monitoring nests, chicks and rescues.

As it is carried out in a city, it is possible to clearly perceive that the coexistence between wild animals and humans in the urban area can be beneficial and viable! And when it does occur, it brings many benefits to biodiversity conservation.

Contact for scheduling and/or further information can be made by phone (67) 3222 1205 and by e-mail: contato@institutoararaazul.org.br

We need your help

Annually our team monitors more than 350 nests in Campo Grande. A lot, right? For this work to be possible, we depend, in addition to a committed team of volunteers, biologists and veterinarians, on the financial support of people and companies.   So we created the “Adopt a chick” campaign! 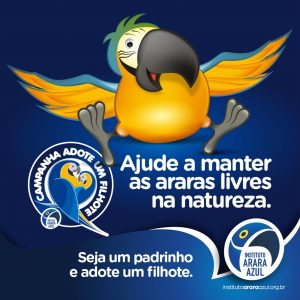 The adoption is symbolic: by donating to a chick, you become its godfather. Thus, you will be able to choose your name and periodically receive information about your godson. Each year the amount of the contribution is stipulated. To know more, click here.

Other ways to help

Planting fruit trees and palm trees is another way to help the macaws. After all, the trees will bear fruit, that is, food for them. And the palm trees will become nests!

Well, speaking of nests, if you follow our work, you must have already seen that we put artificial nests to help hyacinth macaws reproduce in the Pantanal. And you may be wondering why we never put these nests for the blue-and-yellow macaws.

Unlike hyacinth macaws, blue-and-yellow macaws are not endangered. By offering more environments for them to nest, we can negatively interfere with the balance of the ecosystem. So we do not recommend placing artificial nests for this species.

We hope you enjoyed getting to know our work better!