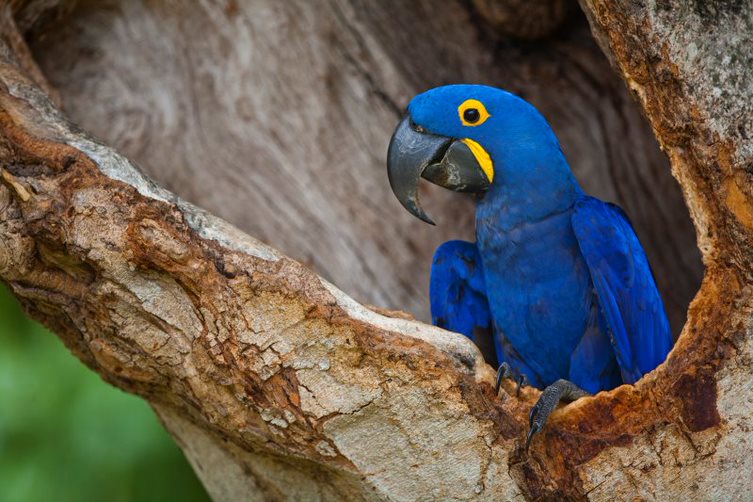 A project that has helped and continues to help to grow the population of free-living hyacinth macaws (Anodorhynchus hyacinthinus) and collects data on other species that cohabit with them – in other words… dear Hyacinth Macaw Project! In this text we came to tell you details about this very important work that we developed in the Pantanal!

First: when and why did hyacinth macaws almost disappear?

Even in the 1980s, studies already showed that the great hyacinth macaws were threatened with extinction. The reason? The loss of habitat, due to deforestation, associated with the capture of these animals in the wild, by hunters to sell them in Brazil and abroad, and also, the capture to collect feathers for making souvenirs almost decimated their populations.

Charismatic and threatened, at the end of 1989, the species caught the attention of our biologist Neiva Guedes. It was when Neiva saw a flock of hyacinth macaws in the Pantanal, that she decided to make them her life project: in 1990 the Hyacinth Macaw Project was born. 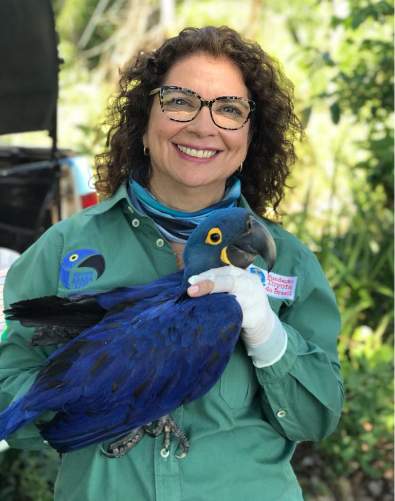 Since then, the main objectives of our work have been: to maintain viable hyacinth macaw populations in the medium and long term in nature and to conserve the Pantanal and its biodiversity as a whole. 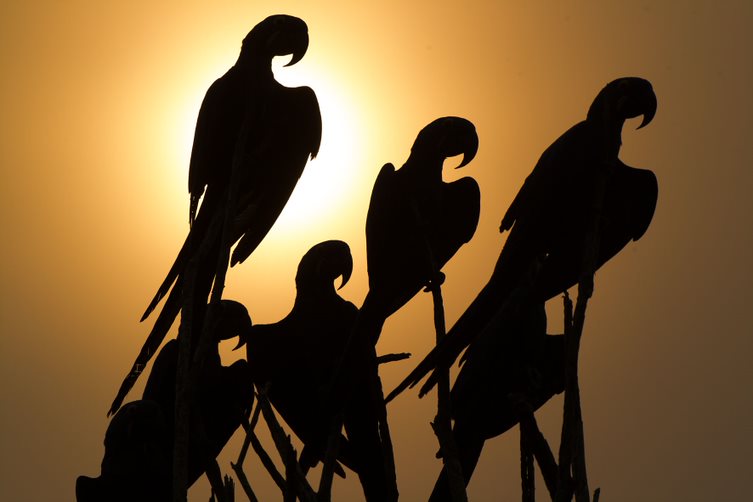 We operate in the biome with the highest concentration of individuals of these blue giants: the Pantanal! The work started at Fazenda Nhumirim, in the Pantanal of Nhecolândia, but we expanded and today we operate in the Cerrado of Mato Grosso do Sul and we also have a base in the region of Barão de Melgaço, at Fazenda São Francisco do Perigara.

On the property there is a cluster of bocaiuva palms (Acrocomia aculeata), called bocaiuval. This palm is essential for the species, which in the Pantanal, feeds mainly on the seeds of the same and the acuri (Scheelea phalerata). Without major disturbances, the place is a true refuge for them. 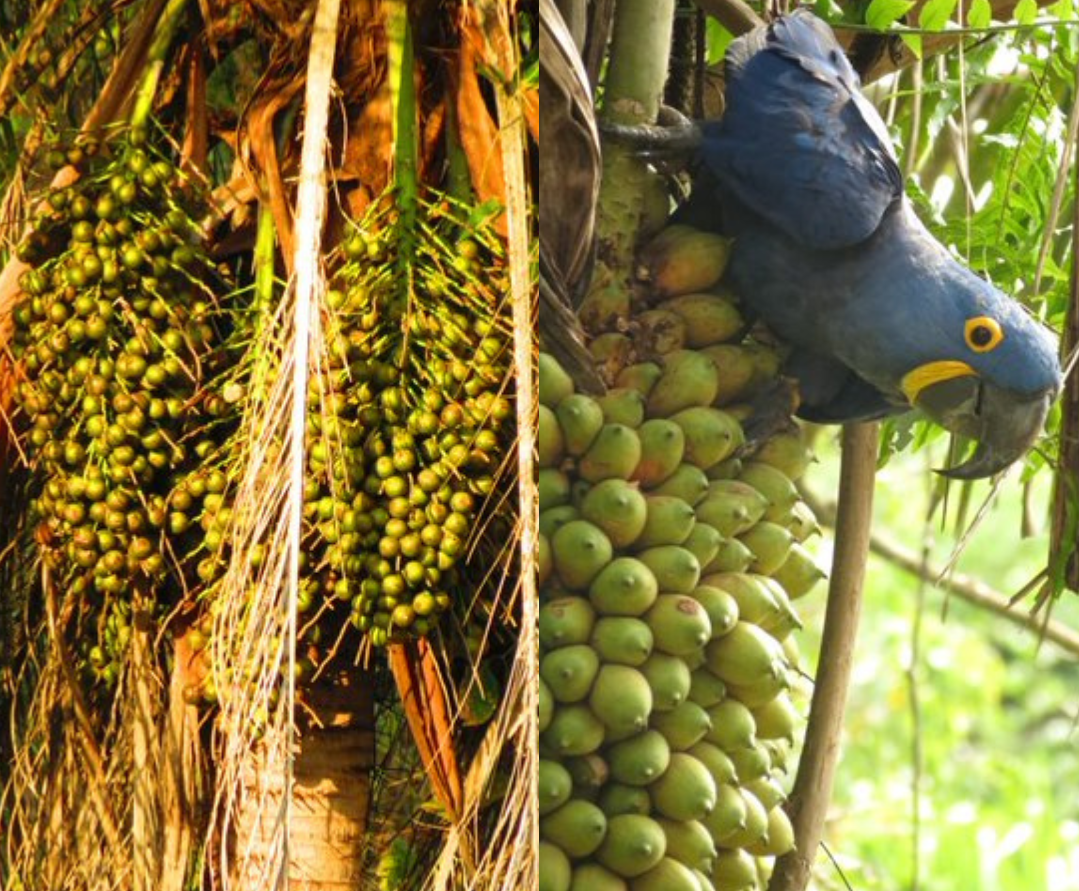 Bunch of bocaiúva on the left and acuri on the right. Photos: Kefany Ramalho

To achieve our goals, we have broken down our actions on SEVERAL fronts, ranging from observing animals in the wild to monitoring nests and all stages of reproduction. See these actions in detail:

When we see hyacinth macaws and other parrots in our area of ​​activity, we record their activities, behaviors and all the data we can about these free-living animals;

We also recorded all data from natural nests – measurements of the cavity and, if it is not already occupied, the potential for occupancy by a hyacinth macaw couple. To find them, we observed the macaw behaviors in nature that indicate nesting, such as vocalization and defense. We also have the help of local farmers. 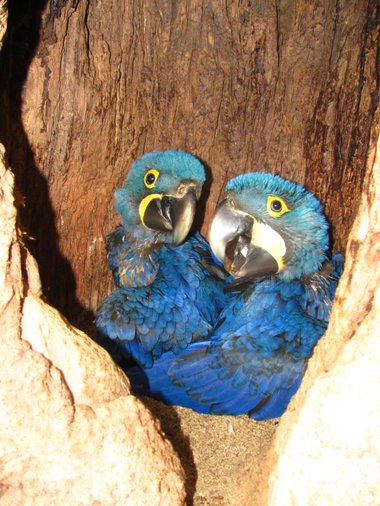 During our studies, we realized that there were not enough natural nests for hyacinth macaws in the wild.

They are the world’s largest representatives of their family – Psittacidae – and they need cavities large enough to support at least one adult and their young. Associated with this fact is competition: several other species compete for nests with them, such as bees, scarlet macaws, blue parrots, toucans, bats, hawks, owls, birds, vultures and even ducks! To see the full list, click here.

Unfortunately, that’s not all: threats such as deforestation and fires contribute to the scarcity of nests. Given these facts, since 1991 we have made and installed hundreds of artificial nests in the Pantanal, in areas with few nests or, to compensate for the loss of one.

Their occupation is a success, largely for the dear hyacinth macaws, but also for other species. 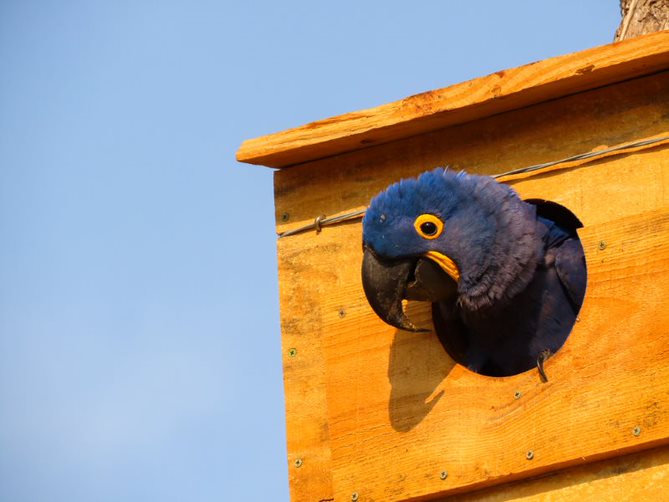 The action of time, like the macaws, can damage natural and artificial nests. On this front, we recover damaged nests or those that are not viable for occupation. 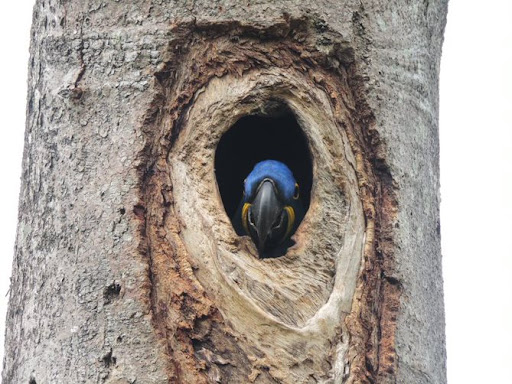 All registered artificial and natural nests are monitored. For that, equipped with climbing and abseiling techniques, we climbed the trees, closely following each one of them. In addition to this practical part, we analyze images from microcameras installed on them, which provide us with more data about the animals. 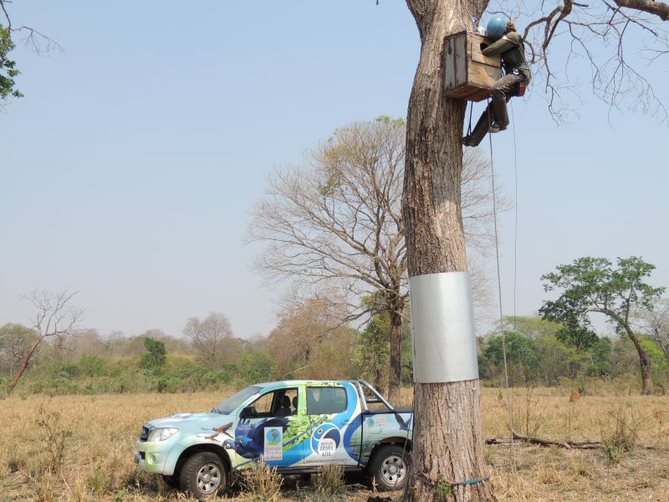 In our monitoring, we observe if there is occupation in the nests, and if so, by which species (hyacinth macaws or others). We observed the hyacinth macaw’s egg laying, its entire incubation period, the birth and growth of the chicks. 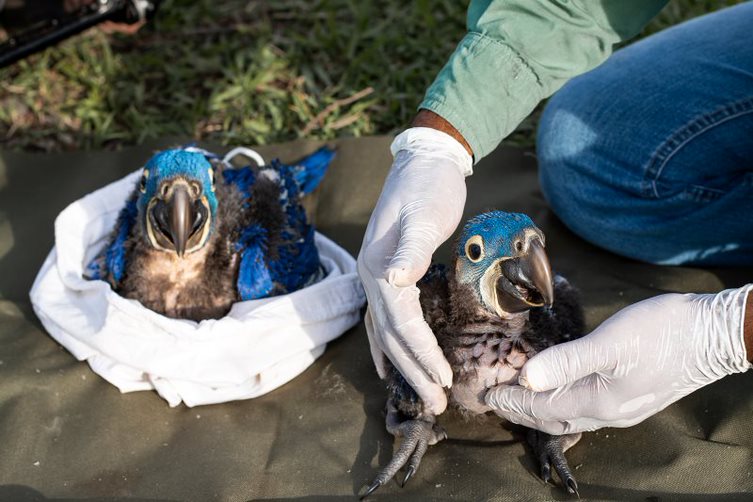 Just before the chick flies, we handle it quickly: we put a tag so that it can be identified later, we collect biological samples such as blood and feces for sanitary analysis, genetics and sex determination of the bird (yes, sexing in birds is commonly done through blood samples).

Our actions do not stop there: behavioral data of the birds in their nests are collected and when there are specific cases of nests with a history of predation of eggs or chicks, our team performs the technical management. 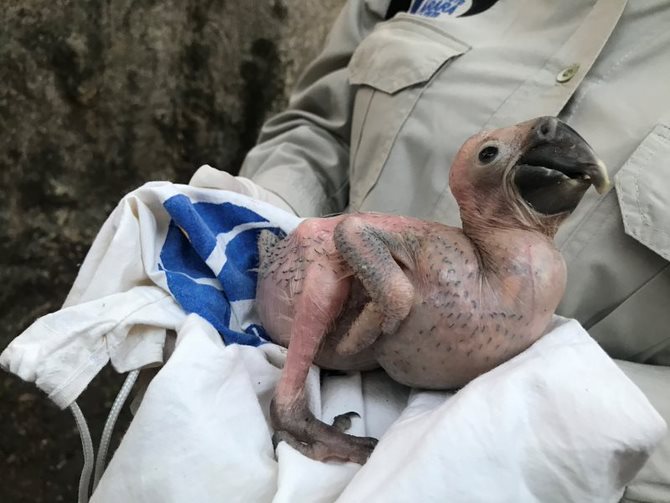 We also held lectures and educational activities about hyacinth macaws, our work and its results in the conservation of the species and the importance of conserving biodiversity!

At the beginning of the Project, the population of these parrots was threatened with extinction. Throughout our activities, it not only grew, but also expanded its region of occurrence.

The species was even removed from the Red Book of Brazilian Fauna Threatened with Extinction and changed its conservation status on the International Union for Conservation of Nature (IUCN) – it went from threatened to vulnerable. This is because its population, previously estimated at 2500 mature individuals, is now estimated at 4300 individuals. 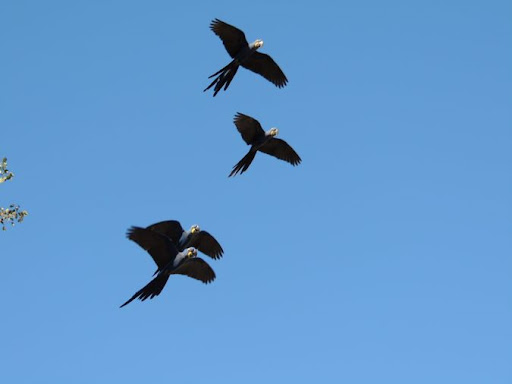 About the nests, we already have more than 880 registered and monitored! Of these, 480 are natural and 400 are artificial, created and placed by our team. And we studied more than 30 species that cohabit with them at nesting sites.

If you want to see them in nature and observe our work up close, we carry out Observation Tours with the guests of the Caiman Ecological Refuge, in the Pantanal of Miranda. Stay in this wonderful environment!

We also carry out observation tours in other places in the South Pantanal. Contact our team at contato@institutoararaazul.org.br or by phone (67) 3222-1205 to schedule! 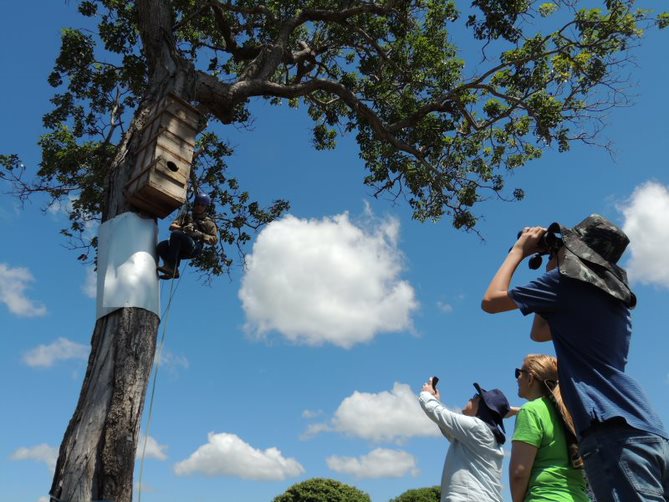 Fortunately, there are several ways to help our work – all extremely important for us to continue our actions. But, we can say that the main one is through our Adopt a Nest Campaign!

Unfortunately, the rate of degradation and loss of natural nests is much faster than the rate of emergence of new ones. This is because the amount of manduvis, the main tree used for nesting, is decreasing in nature due to the wear and tear of time. That’s why the constant deployment of artificial nests is so important – and to be able to install and monitor them, we need your help.

By adopting a nest, you will help not only the hyacinth macaws, but also other species that may use it in nature, contributing to the Pantanal biodiversity. When you sign up, you will receive a welcome kit with an exclusive photo of the sponsored nest, it will be advertised in the marketing of our Adopt a Nest campaign and more than that: during the macaws’ reproductive period, you will receive information about its nest and more information about the project, when a chick is born, you can even baptize it! 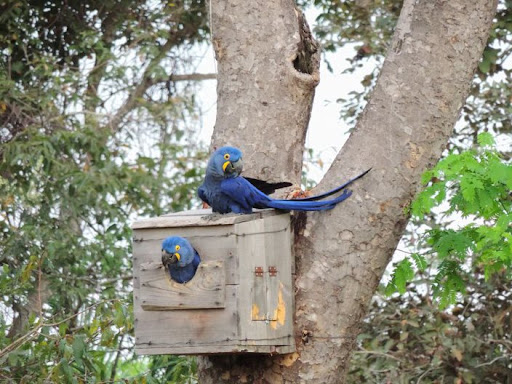 I have a property in the Pantanal, can I help you further?

Sure! The main action is the planting and conservation of the main tree used for nesting hyacinth macaws in the biome: the manduvis and the trees used for food: bocaiúvas and acuris.

Another way to help is by installing artificial nests – done by our team. If you are interested, request our technical services, which consist of 3 phases: diagnosis of the area, construction and installation of nests and monitoring of installed nests. For more information about our services and values, please contact us via email: contato@institutoararaazul.org.br

Buy our products or make a donation

By buying our products you also help our projects:visit our store here. About donations, any amount is of great help! They can be via PIX, PayPal or Pagseguro. Click to donate.

We hope that throughout this text, you have learned more about this important project for this wonderful species! We ask you to help in the dissemination of our work: share this article with your friends and family. The more people who get to know it, understand the threats it faces and know about the Hyacinth Macaw Project, the more people united we will have fighting for its conservation.