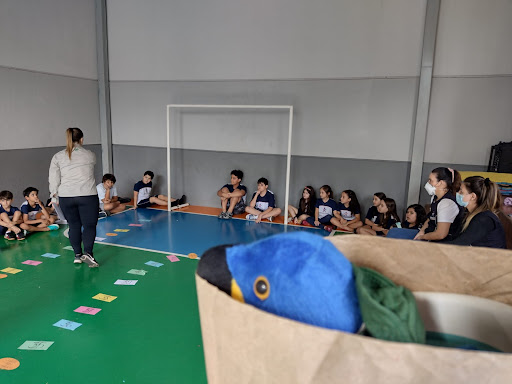 The environmental education in the projects is extremely important for the dissemination of the research in a decoded way for an accessible language and thus make people aware of the need for their attention, for the conservation of biodiversity in its natural habitat.

In this text, we will show how the environmental education actions occur in our two major projects: the Hyacinth Macaw Project and the Urban Birds Project. Come with us, for the conservation of these wonderful birds and their environment. 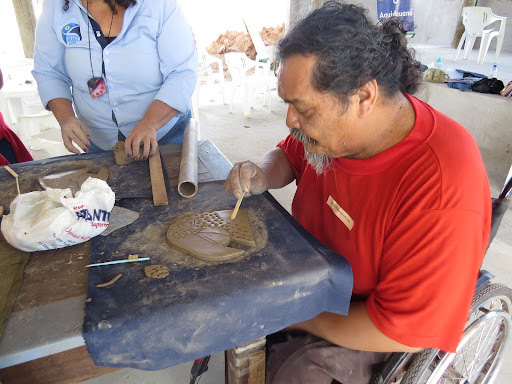 Educational work with the communities (indigenous, quilombolas and locals), where we work through handicrafts and by fomenting local entrepreneurship. / Photo: Hyacinth Macaw Institute

Also, by teaching and bringing environmental guidelines, there is the understanding that individual and, especially, collective actions help bring about change, because an engaged population acts and encourages the creation of conservation measures.

For this, this practice must be participatory, dynamic, and permanent, so that people become agents of social and environmental transformation.

We carry out several educational actions, including allied to the socioeconomic growth of the community, such as the entrepreneurial and handicraft workshops. Over the years, we have noticed that human interference is in fact the main responsible for leading many species to the risk of extinction, among them the Hyacinth Macaw.

However, we are also sure that human interference can be positive, where it becomes responsible for preventing the damage that puts them at risk. Therefore, we started to use the threatened species as a symbol for educational activities. 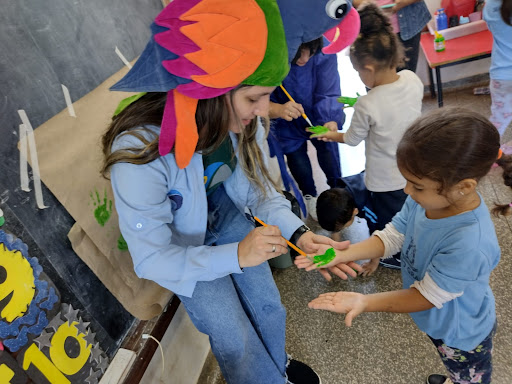 And there is nothing fairer than working with different audiences, both in the cities and, especially, in the communities surrounding the Pantanal, which can, and a lot, help change the reality and the risks that we humans cause to the biodiversity.

Thus, we develop several environmental education activities, with different formats, for both children and adults. They take place in schools, in local communities, whether rural or urban, and in the headquarters of the Hyacinth Macaw Institute in Campo Grande.

The activities for children occur through music workshops, where the Institute works on the interpretation of the lyrics and elaborates choreographies; drawings, animal and nature paintings, and different dynamics to awaken the senses; besides recreational workshops through games. Another interesting activity is the debates, where children are encouraged to reflect and discuss various environmental issues, suggesting possible solutions.

Lectures are also held for children and adults. The lectures take place in various places, such as schools, universities, educational projects, rural properties, and at the Hyacinth Macaw Institute itself, disseminating to the public, in a more accessible way, the information generated by the scientific research carried out by the projects. 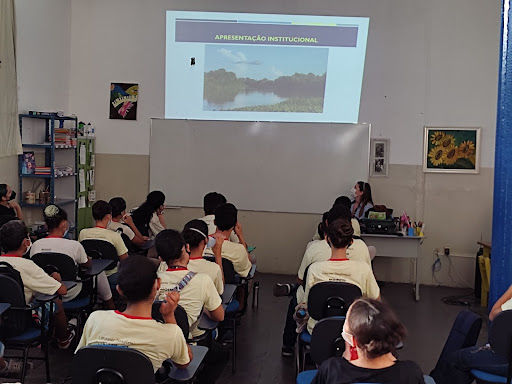 Thus, we started the actions with the intention of democratizing science and bringing environmental causes closer to the community, showing the importance of nature conservation, biodiversity, and, of course, the macaws that became an important symbol transforming their understanding of these issues.

With another opportunity to act in environmental education, our activity with tourists draws attention. Here, we organize observation tours in which they can accompany the research teams, because we know that just watching the wonderful hyacinth macaws and other species in the wild already helps a lot in the sensitization process. 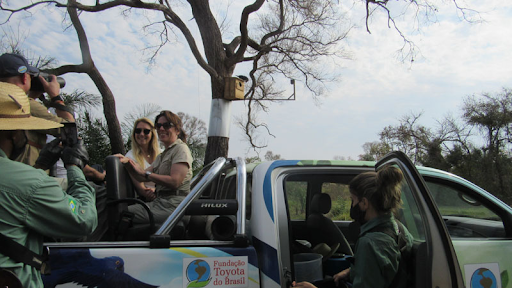 With the tourists, we also addressed many issues and information through lectures about the research and conservation actions developed in the project, as well as the impacts suffered. We present how the Institute has been contributing through its work to the conservation of the species and how the groups of Hyacinth Macaws have increased in the wild, especially in the Pantanal wetlands.

How to participate in the actions of the Hyacinth Macaw Project?

To schedule activities and lectures with us in schools and communities, please contact us by email contato@institutoararaazul.org.br or by phone (67) 3222-1205.

To schedule the Hyacinth Macaw Observation Tourism it is necessary to contact Caiman directly by phone (11) 3706-1800 or even via email marketing@caiman.com.br.

Besides the Hyacinth Macaw Project, we also have the Urban Birds Project, which aims to monitor the reproductive success of another macaw species, the blue-and-yellow macaw (Ara ararauna) and monitor its development in the cities – Campo Grande (MS) – where they currently reside in large numbers. Also, other species are contemplated by the study.

But with this, we brought visibility to this species and today, it is a symbol of the city, thanks to several educational actions. 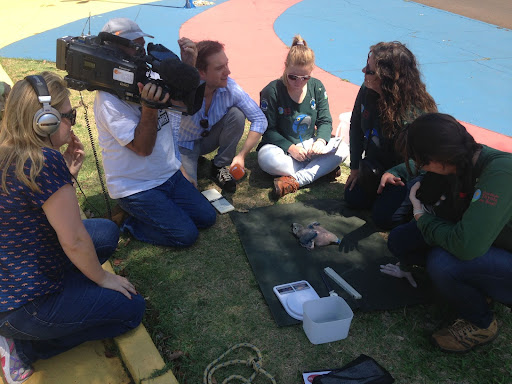 In Campo Grande, the research base is at the Institute’s own headquarters, where the educational activities with children and adults also take place. There, several activities and lectures are presented, such as those held for tourists who come especially to accompany the project.

In tourism, before the field activity with the team, we talked about the project, telling how we monitor the nests and chicks, how we rescue and study these birds, showing how and why they ended up in the cities and their importance in nature.

After this presentation, we started our nest monitoring activity around the city, so people can understand and see how these birds nest and how the nestlings are monitored. We noticed that there is a great awareness among most visitors, who feel motivaded to conserve the macaws and the environment as a whole. 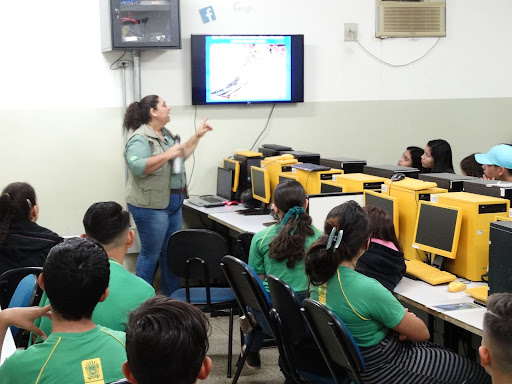 As with the Hyacinth Macaw Project, we also give talks at schools and in urban communities. 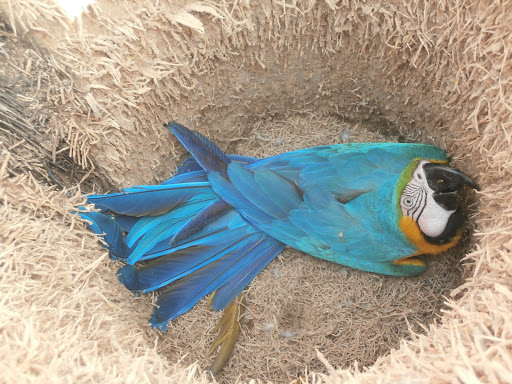 From this, people symbolically, become agents for the defense of nature and the protection of biodiversity, because after understanding this need, many begin to rethink our way of life and how we are threatening the existence of various animals, including our own. 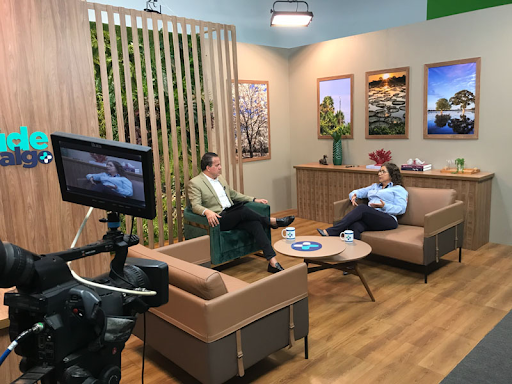 It is important to mention that we also use different means of communication to further increase thedissemination of the project and of science. We grant interviews to the most diverse media, such as radios, newspapers, television programs, videos, and many others. We are also very active in social networks: @institutoararaazuloficial, where we share the advances of the project and conservation.

But, of course, there is still a lot of work ahead.

How to participate in the actions of the Urban Birds Project?

To schedule activities and lectures with us in schools and urban communities in Campo Grande-MS, please contact us by email contato@institutoararaazul.org.br or by phone (67) 3222-1205.

If you would like to make a visit, our headquarters is located at Klaus Sthurk Street, nº 106, Jardim Mansur – Campo Grande, MS. Our office hours are from 8am to 12pm and from 1pm to 5pm.